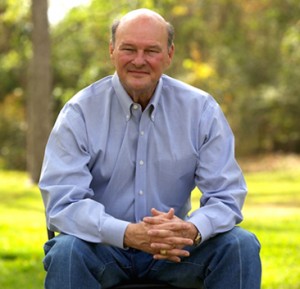 John was born April 4, 1947 in Huntsville and was raised on land farmed by his great-grandfather, grandfather, and father for over 125 years in Madison County. John moved back to Huntsville in 1950, and then to Bryan in 1960. He graduated from Stephen F. Austin High School in 1965 and is a member of the Texas A&M Class of 1969, graduating with a BBA in Marketing. While in college, John founded Texas Aggieland Bookstore, which has now been in operation for fifty years. John served in the Texas Army National Guard as 1st Lieutenant from 1969 to 1975. He was an honor graduate of the USAR Basic Course and is Airborne qualified.

John began his involvement in politics in the early 70s when he served as Chairman of the Republican Party of Brazos County. During his tenure as Chairman, John also served as Civic Division Vice President of the Bryan College Station Chamber of Commerce, chaired Senatorial District 5 Caucus and began his almost four-decade membership in the National Federation of Independent Business, including serving as a board member. John is a long-time member of the Texas Retailers Association, serving for many years on its Board of Directors and taking an active role on its Tax and Legislative Committee and Executive Committee. In 2010, John Raney was named the Outstanding Member of the Texas Retailers Association. Through these roles, John participated and testified in numerous committee hearings in the Texas Legislature. 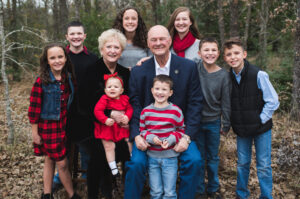 John and Elizabeth Raney with their eight grandchildren

While attending the Republican State Convention in 1972, John met his future wife, Elizabeth. They were married in 1974.  John and Elizabeth have two daughters and sons-in-law, Beth and Grant Hawkins and Laura and Alex Scogin, and eight grandchildren. For over fifty years, the Raneys have been active members and served in many leadership roles at First United Methodist Church in Bryan and for fifty years, John has been an active participant in various Masonic bodies within the Brazos Valley. John is actively involved in Aggie sports and many community organizations.